3 Comments
Food Systems, Kristy Spouts Off, On the Land

Can Tiny Gardens Feed the World?

Note: This is the second time I’m taking advantage of my status as a student in Marylhurst University’s Food Systems and Society master’s program to use some of my writing from last quarter.

Community gardens are wonderful things; don’t get me wrong. They provide a place for people who live in “un-landed” domiciles (i.e. apartments or homes on small lots) to be able to experience the joy of working a plot of earth and raising a bit of food. And they create mini-communities of gardeners.

But by “a bit of food,” I mean a bit. My friend Rebecca has a plot in the P-Patch in Seattle’s Belltown neighborhood (which has appeared in this blog before). We went to see it when I was visiting. I noted the 3-foot-by-6-foot raised bed and thought, “Oh dear, what a tiny area to work with.” And then I realized she only had half of it.

Granted, at the time I was coming from managing a garden that was 100 feet across. But even that was not enough. There is no way I could have grown enough food to sustain my family of two off of that plot. It was something I did for pleasure. And it’s a good thing I enjoy gardening, for it basically commandeered my every weekend from May to September, and certainly didn’t save me any money if I factored in my time.

I don’t think people understand what is involved in growing food. Community gardens are more of a community-building activity than an arrow in the quiver of food security. Additionally, they are usually places of privilege—the P-Patch of which my friend Rebecca is a member has a waiting list, which means anyone who would like to garden there must have a fairly stable life, phone number, address, etc. As Allen notes, “[Community] is defined differently by different people as mediated by income, wealth, property ownership, occupation, gender, ethnicity, age, and many other personal characteristics” (Allen, 2004, p. 179).

So, how can we feed everyone without destroying the environment with toxic chemicals and excessive petroleum-based fertilizers, and exploiting thousands of farm workers? I propose a tiered system of personal (backyard chickens, tomatoes in buckets), local (CSAs and small farms supporting local markets), regional (grow food where it grows best in a sustainable manner), and global (disaster relief, staples, global trade of responsibly grown specialty items) food-growing efforts.

Feeding the world can be done; but it will take more than a few beautiful backyard garden plots.

Allen, P. (2004). Together at the table: Sustainability and sustenance in the American agrifood system. University Park, PA: The Pennsylvania State University Press.

Mike’s birthday was two weeks ago; we celebrated in front of a roaring blaze in the backyard fire pit. As we wrapped it up around 10 (it was a school night and, moreover, we are old), little flakes of snow started to drift down. We basked in the glow of the bonfire and enjoyed the lovely scene.

The next morning, it was still snowing. In fact, it snowed almost nonstop that week, and by last Saturday the fire pit, and the previous icy crust surrounding it, were covered with a foot of new snow. It took nearly all day to clear our 100-foot-long driveway. Snow here falls pretty dry and light, but the longer you wait, the harder it will be to remove it. We got on task fairly early, which saved us from having heart attacks. (I had been told in September by the county plow dude that it was unusual to get more than a couple inches at a time, so we’d limited our snow-removal equipment purchases to a single shovel.)

Monday, I skied the field with the dogs. Tuesday, it was too soft. Wednesday, the new snow had collapsed and was melting into torrents of cold water. Since we live on a slope, everything above us ran toward the house.

Water takes the easiest route available to it. When it got to our house, some of it went around and some of it went through. Through the foundation, that is, and then pooled in the furnace and laundry rooms. 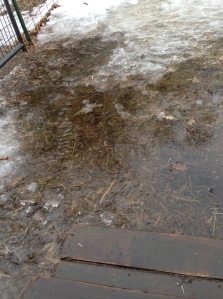 This should be our backyard, not a lake

This is called a “water event.” Where we live now and where we lived in the Columbia River Gorge are, mostly, different. There was forested and here is cleared. There has Douglas fir and here has tamarack. There has Cascades running north and south, and here has Wallowas running east and west. One thing the properties have in common is slope, and slope means when there’s water, there’s running water.

In Get Your Pitchfork On!, I write about the struggles we had in the Gorge to keep our swales from eroding into deep chasms and collapsing banks. But we’d never had water in the house.

Thursday morning we took turns with the shop vac, hauling 35 gallons of water out of the basement in five-gallon increments. The trouble was, where to put it. Lugging a sloshing pail of meltwater out the basement door, I realized the carport was also flooded.

Putting the “port” in carport …

Mike initiated a trenching campaign, digging channels in the snow to coax the water across our backyard and around the house, and then draining the carport into the field below it. I made one trench myself: It was fascinating to spade a path through the snow and watch the water take it over. It reminded me of childhood engineering projects in the woods near my house.

I generally love the sound of a babbling brook, but not so much when it is running under my porch. As with the snow, it was in our best interest to address the water right away. The trenching saved us gallons of vacuumed water in the basement.

Now, the worst seems to be past us. The carpet in the basement will need to be cleaned, and then we will put Water Event 2014 behind us.

New Review of Get Your Pitchfork On!

What I wouldn’t give for a warm, home-grown tomato off the vine right now! As a Northerner, it’s just not going to happen. But—that doesn’t mean I can’t have any garden at all.

As I mentioned in November of last year, I was impressed with Niki Jabbour’s The Year-Round Vegetable Gardener—as a native Midwesterner; former resident of Klickitat County, Washington; and current resident of Wallowa County, Oregon, I know how unlikely a winter garden can seem. But Niki’s from Nova Scotia, so if she can do it, I can!

Niki and I traded books, and her review of Get Your Pitchfork On! came out this week. I have to thank her for her complimentary and insightful review. It’s so rewarding when someone really responds to the book.

I’m super-pleased for Niki that her second book, Groundbreaking Food Gardens, will be out in March! Judging by her first one, this book will be full of helpful tips and ideas, and be organized and written well, with lots of great photographs.

Cap’n and Pendleton just passed the four-month mark, so I thought it might be time for an update. They are coming along! Pretty good with vocal commands, though they do take off at least once a day during our walks in the field, and lose their ability to hear human voices. In related news, they are also learning to walk on leash. Mike just taught them to catch a treat in the air. I am working on having one do one thing (stay) while the other does another (come), so they listen for their name and not just the command.

Pendleton has overtaken Cap’n in size—at the last veterinary visit he weighed 33 pounds to Cap’n’s 29.8. This makes sense, as 1) He is male and 2) He is taking after his golden retriever mother, while Cap’n is taking after her border collie father. Pendleton is stronger but Cap’n is faster and more coordinated.

One last hurdle to overcome, so we can socialize them, is for Cap’n to stop throwing up in the car! This makes it difficult to take them anywhere. She is definitely a lady, with a delicate constitution, easily hurt feelings, and Disney-grade eyelashes. That said, she is a lady dog, so loves digging up mouse nests and finding coyote-abandoned deer forelegs as much as her brother.

But enough description—what you really want are photos!

Digging up a mouse nest

Pendleton, Cap’n, and a little friend