I understand the sentiments of people who refute Thanksgiving. There is no denying the devastation that invaders from Europe wreaked on North American natives over the past 500 years. However, to me, Thanksgiving is a beacon of hope.

I think it’s unfair to wrap the entirety of the genocide and displacement of Native Americans up with Thanksgiving. Conquering foreign territory was not unique to European culture at that time in human history. There were even warring Indian tribes across the United States. The myth of the “noble savage” does as much damage as ignoring our shared history. Native Americans are not magical nature pixies; they are human beings with the same gifts and flaws as any other humans.

The feast that occurred in 1621 is not well documented. Maybe the Indians and the colonists shared food that day, and maybe they didn’t. But let’s say they did. Let’s say they were nice to each other, and honored each other’s cultures. Things may have gone horribly wrong from there, but let’s just hold that day in our hands.

There are subsequent massacres of Native Americans for which the Puritans had Thanksgiving feasts. But let’s just keep Thanksgiving simple. Modern Americans rush around, physically and symbolically, all year; let’s honor Thanksgiving for the opportunity it provides to slow down and share a meal together.

Americans should recognize the brutal and unfortunate history of European domination and massacre in North America every day of the year, not just on Thanksgiving. It should be addressed not with guilt and derision but with amends, and equity in legislation and business practices. Thanksgiving can be a time to sneer at everyone and mutter “Thankstaking Day.” Or, it can be an opportunity to recognize the problematic legacy we have in the United States and also enjoy the Earth’s bounty and be thankful for one’s family and friends.

I feel an affinity with a parcel of land in Illinois that I have never seen and probably never will. This 90 acres was purchased by my great-great grandparents, Jacob and Margaret Eberle, in 1900 or so. When they died, ownership was split between their children, including my Grandma’s father, Harry.

Splitting shares is common practice as family possessions transfer from one generation to the next. It doesn’t take long for the value to become so diluted as to be more trouble than it’s worth. Such is the case here—my Grandma’s uncle sold his share to his sister Irene, and even then the smallest shares, owned by Irene’s great-great-granddaughters, are 1/24.

In November, a sale of this land will close, ending more than a century of Eberle ownership.

I interviewed my Grandma last Friday, when I was in Wisconsin for Get Your Pitchfork On! readings in Milwaukee and Madison. I knew that she grew up in town, not on a farm, but I was hoping to hear stories of her spending summers on this land, visiting her grandparents. I knew she and her family foraged nuts and mushrooms from a neighboring forest, and I wanted to learn more about this. I hoped I wouldn’t make her sad by asking about it.

“Oh, I’ve never seen the land,” said Grandma with a dismissive wave. “It was in the southern part of the state, and we lived in Lincoln.”

Poof! went my romantic bubble. Contrary to my assumptions, the farmland was an investment. It was leased to a farmer, who paid my family to work it. My grandma remembers nothing about the farm except that they would get a dividend check every Christmas, and that its mineral rights were explored for a while (but never exploited).

There’s really no reason to feel attached to this land. If I hadn’t learned of the sale it would have simply floated on down the river, like everything else. I have no desire to abandon Oregon for Illinois. I’m not a farmer.

But still, it’s family land. As someone who has turned out pretty rootless, I feel an attraction to something—anything—that has five generations attached to it.

Battle Over Our Food

There has been a lot of conversation in the last few days about certain American billionaires trying and—more significantly—failing to buy the last election. If you view the election this way, it was a fantastic display of “We the People” in action. However, California’s Measure 37, which would have required food manufacturers to identify genetically modified ingredients on their labels, succeeded.

The United States is in the first stages of a food revolution, a time during which people will have to decide whether they want to eat food that is cheap or food that is nutritious. At the moment, these things are mutually exclusive.

At the moment, not everyone in the United States eats every day. Many people only have access to the cheapest of food, the mega-processed, prepackaged schlock that is nearly devoid of nutritional value. Diabetes is an epidemic. This is an embarrassment for the richest country in the world.

The stated mission of mega-corporations like Monsanto is to feed the world. They look to products like “Golden rice,” a plant that has extra beta-carotene imbued in it, to fill the empty bellies of billions of people. Regular agriculture is not cutting it, they say. To some degree, Monsanto is right.

People who are against genetically modified organisms argue that they threaten the entire world’s food chain by introducing “plants” that have not been tested for their effects on the environment nor on human beings. They believe the real mission of corporations like Monsanto is to “own” agriculture, to create a world in which the only food available is the food to which they own patents. Anti-GMO people are also right.

Anyway, back to California. In 2012, a bill to require GMO ingredients to be identified as such got onto California’s ballot. It wasn’t trying to ban GMO foods, just to let people know when they’re there.

This particular ballot measure was about choice—the people who want to avoid GMOs can, and the people who don’t care can do that, too. The following corporations launched a campaign to defeat Measure 37. Many of them won’t surprise you:

I know some of them surprised me.

While most elections were not bought in 2012, this one was—the ballot failed in response to ads claiming food prices would go up and downplaying the risk of genetically modified ingredients.

We have to figure out a lot of things, one of which is how to feed all the people on the planet without destroying the planet. Measure 37 marks the beginning of that process, not the end.

Julie was one of my go-to people when I was writing about horses for Get Your Pitchfork On!. I remember her trying to decide if her second horse, Laredo, was the right horse; negotiating with his owner; training him and coaxing him to want to obey her. But her first love is River, whom she met nine years ago. They have worked hard together so I knew she was devastated when she posted on Facebook that something was wrong with him. I’m glad everything turned out all right, and she could share this story. She has others on her website.

Owning horses is neither easy nor cheap, and definitely not boring. A couple of weeks ago, I stopped by the barn where my two horses live with my friend’s horses. My friend was out of town so I was tossing hay to the herd and checking their water, which takes only a few minutes.

My bay mustang, River, was the last horse to arrive from the pasture, which was unusual. Normally he led the herd. I glanced over to tease him about being lazy, and then I saw why he was so slow. He was holding one of his hind hooves off the ground, limping to the barn on three legs.

No visible wounds, so I took off my gloves to feel his entire leg, but I couldn’t detect any heat or swelling in his joints. He held his leg out to the side, as if his hip were dislocated. My vet’s office had closed five minutes earlier, so I called my other vet, reached his emergency referral service, and left a message for the on-call vet.

Meanwhile, River limped the last fifty feet to his dinner and began to eat. His appetite was a good sign. But the way he held his leg off the ground, his opposite leg quivering with the effort of supporting all the extra weight – I lost it and began to bawl as I imagined the worst. I realized that if I had to put him down that night, I had no idea what I would do with his body.

Two hours later the emergency vet arrived and I was grateful. She suspected a hoof abscess, although she couldn’t locate the entry point for the bacteria in the poor barn lighting, which meant she couldn’t open and drain it. However, she gave him some “bute” (an equine anti-inflammatory) and advised soaking his hoof in Epsom salt.

River and I spent the next morning at the vet’s. I was groggy after two hours of sleep but I doubt River slept much, either. I learned that an abscess is a pocket of infection, and in a horse’s hoof it can become excruciating in less than 24 hours. The buildup of pus and inflammation between a hard hoof and the soft internal tissue makes every step literally unbearable. In River’s case, my vet believed that this summer’s extreme stretch of dry weather, followed by sudden wet weather, created a tiny crack in the “white line” at the base of the hoof which gave bacteria an entry point. Puncture wounds or even stone bruises can also cause abscesses.

Once the entry spot was located, excavated with a knife and then drained (the surprised expression of relief on River’s face was comical), the resulting inch-deep hole had to be kept clean and protected to allow the horse’s physiology to regenerate the sole.

My vet recommended soaking the hoof in Epsom salt water for thirty minutes. A friend loaned me her Soaking Boot (an equine galosh that secures around the ankle) which was a godsend, as River thought that keeping his foot in a bucket of water was a stupid idea. After soaking, per my vet’s instructions, I filled the hole with a poultice of sugar and betadine antiseptic to draw out any remaining infection. I covered the poultice with a square of gauze and duct-taped it into place, with the tape covering the bottom and sides of the hoof, but below the hoof’s hairline. Finally, I latched a device called an Easy Boot (in my case, a Not-Remotely-Easy Boot) onto the hoof and hoped it would stay on. The next day River and I would do it all again.

River also received doses of bute for the next couple of days, until he stopped limping. We soaked and poulticed for three more days after that, then I no longer needed to soak his hoof, and I could simply infuse gauze with betadine and stuff it into the ever-smaller hole (then duct tape, then Easy Boot) for about two weeks. The treatment was time-consuming and I had to be vigilant about not getting kicked. River is not a “kicky” fellow but he grew tired of having his hoof handled. My total vet bill–including the emergency visit–was nearly $600.

My husband thinks that I was crazy to do all of this, but it’s what it means to own horses. It’s more than just riding. When we came back from the vet that first day, River looked at me as if to say, “You know, you may not be totally useless after all.” For a once-wild mustang who has always been skeptical of people, that was a hearty “Thank you.” 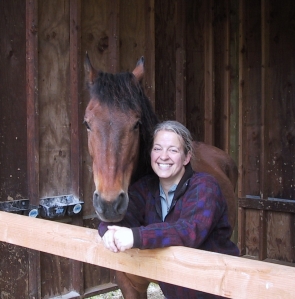