You may have read in a previous posting about what a bad cook I am. There are exceptions–well, one exception. I can cook eggs for breakfast. Back when I was single, I also cooked eggs for lunch and dinner. My roommate Rebecca was astounded at how I could eat so many eggs and not tire of them. On the contrary, I did a little dance every time I bought a new carton.

Imagine the thrill when, shortly after I moved to the country, I learned I wasn’t even eating good eggs. Farm-fresh eggs are so much better, I read in books and farming magazines. They have good cholesterol instead of bad cholesterol, more protein and less fat. They look better.

Look better? How, I wondered. Because they are brown? I was planning to get chicks but it would still be five months before I’d have any eggs. At the feed store, I found my answer. They had eggs for sale by the dozen, grown by local farmers. I fried one up as soon as I got home.

Whoa, Nellie. As soon as I cracked the shell I could see the difference. You know that saying, “You are what you eat?” Well. A farm chicken eats (often organic) feed, fresh cracked corn, and whatever bugs and seeds it cares to forage from ranging freely through the grass. A commercial layer eats whatever crap the factory owners care to throw her way, sometimes allegedly even ground-up former chickens. They are in cages and never get to spread their wings or see the sun.

Can you tell which is which?

Caveat: The upper egg is an “organic” store-bought egg, so it’s less gross than a true factory egg, which I cannot bring myself to buy even for demonstration purposes

And chickens are not the limit to eggs on a farm! There are duck eggs, slightly larger and with a consistency that makes them a favorite with bakers. And quail eggs, which are more of a novelty than anything else.

How cute are those?

When young hens (called pullets) start laying eggs, they are sort of practice eggs. They’re a bit smaller than regulation eggs but every bit as yummy. When our chickens laid their first eggs, I was so proud of them I took a picture and sent it to Mike, who was out of town. 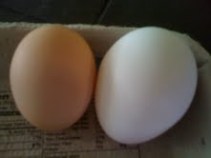 Once I had laying chickens, I was about as happy as could be. All I had to do was walk out to the barn, scoop up a couple eggs and go cook them. Often they were still warm, a particular pleasure on a cold morning. Thank you, chickens!

Even after the chickens got into their groove, mishaps could occur. Sometimes an egg had two yokes. Sometimes it had an extra-tough shell. One didn’t have a shell at all. And once, I discovered this monstrosity:

It was basically two eggs in one shell. That must have stung a little on the way out.

My former roommate came to visit, and the first thing I did was cook her some eggs! We even re-created the Egg Dance in the driveway.

If you are thinking about moving to a rural place and take regular advantage of the cultural amenities of the city, you might have a problem. I submit for your consideration the extremely urban weekend Mike and I just had:

On Friday evening, we walked 15 blocks from our house to the Sapphire Hotel and shared a fresh salad of locally grown mixed greens and a big bowl of mussels and clams in a coconut lemongrass broth. The Sapphire has fantastic cocktails; we enjoyed Manhattans made with middle-shelf bourbon, imported bitters and vermouth, and house-marinated cherries.

On Saturday evening, we attended the Portland Gay Men’s Chorus. The current program is called The Young Person’s Guide to the Gay Men’s Chorus; part of the program gives a history of this and other gay men’s choruses in the United States. When these choruses started forming in the mid-1970s, many members withheld their names from the roster for fear of losing their jobs or facing other forms of persecution. In the 1980s, the PGMC was decimated by the AIDS epidemic. Today, the chorus is thriving—and a handful of the 130 members are straight and/or female. None sings with his/her name withheld.

Today, I attended Profile Theatre’s matinee production of A Lesson Before Dying. Set in Jim Crow Louisiana, this play (an adaptation of the novel by Earnest J. Gaines) deals with the idea of personal dignity within a discriminatory and unjust power structure. Five of the cast members were African American and two were white.

On three separate occasions over the weekend, Mike or I took a short walk to a specialty store. On Saturday morning, I bought a bag of organic, fair-trade coffee beans roasted by a local company. Later in the day, I picked up a loaf of still-warm olive como bread and a tub of Oregon-grown goat cheese. When Mike realized he needed half-and-half to make biscuits, he walked to the “natural foods” grocery six blocks from our house.

While our friend Sallie sat with us this morning for breakfast (she had walked over from her house), our friend Ivy walked past our window and waved.

If you move to a rural area, having this kind of weekend will probably be impossible. Not only will you lack the leisure time (you’ve got a barn to muck out), these amenities may not exist.

Then again, maybe they will. The PGMC is bringing their “Young Person’s” program to Pendleton in April.

How Many Seeds Make a Plant?

My friend Rebecca was thrilled when she joined the Unpaving Paradise P-Patch, a brand new collective garden in Seattle. She had never done such a thing before, and couldn’t wait to grow her own food. Rebecca and her cohort worked up the beds from scratch, distributing 120 cubic yards of compost. They built a shed. That’s a lot of hard work.

Rebecca preparing her bed in the P-Patch

Finally, it was time to plant seeds in her new plot! She called me for advice.

“Why don’t you tell me what you’ve done so far?” I started. She said she had read a lot about gardening, and learned that since it was still early spring she should only plant cold-hardy things like peas, lettuce, spinach and beets.

Good. I asked about quantity. She described the hill of peas; the square of spinach; the four rows of lettuce …

“Wait a minute,” I interrupted. “How much lettuce did you plant?”

“I hope you like lettuce!” I laughed. I tried not to sound like I was laughing at her. Mike and I did a similar thing in one of our first gardens, when we planted twenty-eight tomato starts.

“How many seeds do you think you planted?” I asked. If you’re not familiar with lettuce seeds, they are about as big as the dot a pencil makes on paper. Depending on the length of the rows, unless she used a microscope and tweezers, I would guess she put a couple hundred in the ground.

“Well, I don’t know!” She sounded a titch exasperated. “How many seeds make a plant?”

I’m not a fan of texting-based initialisms, but “ROFL” is appropriate here. Such a fantastic example of how removed urban people can be from nature! Even someone interested in nature! I was laughing so hard I couldn’t ask the volley of follow-up questions running through my head: Did she think the seeds mated? Did they rub against each other, like a Boy Scout trying to start some twigs on fire, until a plant burst forth from the friction?

Rebecca, being a patient person, waited quietly as I collected myself. I explained how germination works and how she would want to thin the plants out as they grew so that they didn’t stunt each other competing for nutrients. “And you can eat the trimmed-out seedlings!” I added, endeavoring to prove I was on her side.

Please don’t let this story scare you into not asking me a question! Get Your Pitchfork On!
is chock-full of dumb things I did and asked. That is learning: asking about things you don’t understand. I promise not to laugh–or, at least not as hard as I did on the phone with Rebecca.

Rebecca persevered and enjoyed many salads!

There are two reasons I have no recipes in Get Your Pitchfork On!:

Mike can attest to No. 2. Early in our relationship, we found ourselves at my apartment around 4:30, and I suggested we whip up some dinner. I looked in the freezer, pulled out a 12-pound turkey, and said, “We could make this?”

Around the same time I attempted to create spaghetti sauce using tomato paste (which I thought was marinara concentrate, the way one makes orange juice from concentrate), “herbs,” and soy sauce. To Mike’s credit, he continued to date me.

But, I know you recipe people are always on the lookout for a new idea! So I will share a recipe I published in The Woman’s Journal, a now-defunct Portland monthly, in 1997:

A Recipe from Kristy’s Kitchen

1 can of tuna fish