3 Comments
By Get Your Pitchfork On! Friends, The Real Dirt

“Home improvement” doesn’t always mean building something—sometimes it means tearing something down. In this case, it meant destroying my desk. Or, part of it.

My friend and fellow writer, Lynn Darroch, offered me this desk a few years ago, along with two plywood shelving units that originally came from the phone company in North Bonneville, Washington, a town with an interesting, checkered history. 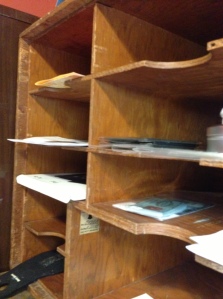 The desk is a behemoth, and I love it. It weighs about a hundred pounds, is nearly three feet deep, and has six legs! I know my trees better than my lumber, so I’m not sure what it’s made of. Oak with a cherry finish? What I do know is that it is solid wood.

Another reason it’s so heavy is that it has an old-fashioned typing table: A cabinet on the right that opens to a flat drawer, which pulls out and then lifts to give you access to your Underwood.

Anyone who has experience with old typewriters knows how heavy they are. People used to build things to last. So what kind of mechanism is strong enough to support that kind of weight? Industrial-grade steel, of course.

Having moved this monster three times, Mike and I were not looking forward to doing it again. I decided that I could eliminate at least twenty pounds if I removed the typing table.

How was the issue. This is no Allen-wrenched ticky-tacky “modern Danish” furniture. The more I investigated, the more futile it seemed. But I ignored the reality and started picking away at it.

I started by unscrewing the hardware from the wood drawer, even though I suspected this would get me nowhere. I managed to remove a couple screws but, sure enough, they were essentially finish work on a much more complicated operation. 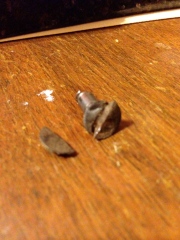 The brackets that held the drawer were connected to roller-wheels that ran along tracks. Bolts that needed to be removed were blocked by the sides of the cabinet. Some of this must have been assembled, and then inserted into hardware that had been installed in the cabinet. And then the carpenter locked it all in with a wooden frame around the front of it for the cabinet door.

The raising mechanism was bolstered by four rusted steel springs that sang with tension any time the drawer was moved or the cabinet door closed. These seemed like they needed to go first, and very carefully.

Prying one end off seemed safer than trying to sever. Still, I recognized the hazard of this operation—I donned work gloves and eye protection, replaced my shorts and sandals with pants and shoes, and used the pliers in the toolbox with the longest handles. I got a good hold on the end of the first spring, moved as much of my body away from the cabinet opening as possible, and twisted.

I marveled at violence with which the spring let loose. It reverberated through my bones, threw the pliers, made a wicked zingy snapping sound, and then bobbed around from the top in odd, menacing circles. The second one was a little harder to do simply because I knew what I was in for. Line it up. Brace yourself. Twist. ZZZWANNGGG!!! Got it.

I saw no alternative but to take the shelf out in pieces. I wanted to cut as close to the hardware as I could to preserve the largest piece of wood. Remember, this was solid oak or whatever—might come in handy for another project down the line. It was too thick for our little trim circular saw, so I pulled out the reciprocating saw instead. This wouldn’t give me as nice of a cut, but I didn’t want to go buy another tool just for this “project.” 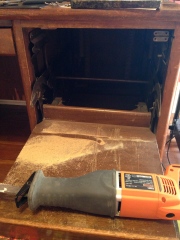 I propped up the shelf so it wouldn’t vibrate, and chopped through it. Now I was really committed.

I also needed to cut through the remaining piece of wood, the short way, so that it freed the steel frame to collapse toward the center so I could coax it out. This time, there was no way to prop up the wood. It vibrated like crazy! The noise was formidable. Should have added earplugs to my safety gear. I gritted my teeth and kept on it until I had two cuts. I’m sure the neighbors wondered what I was up to.

The wrestling match wasn’t over—I had to remove a bunch more eighty-year-old screws, cut the lateral support bar, and work the whole thing around the lip on the front of the cabinet. It didn’t want to come out, and I couldn’t blame it. I thought of the man who had built this desk, so long ago. He did a good job.

Coda: When I first acquired Lynn’s desk in 2006, after Mike and I finally wrestled it into place and I was replacing its empty drawers, I looked in the chasm that housed the typing table and saw a piece of paper wedged into the very rear of the cabinet. I fished back there with my outstretched fingertips and retrieved it. It was my own business card—the one I had made after moving to Portland in 1995. Lynn had been one of the first people I met, when I attended a meeting of the now-defunct group Northwest Writers. And here was the card I’d given him! I put it back where it was.